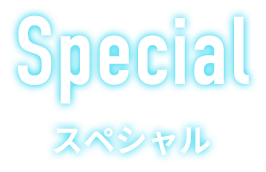 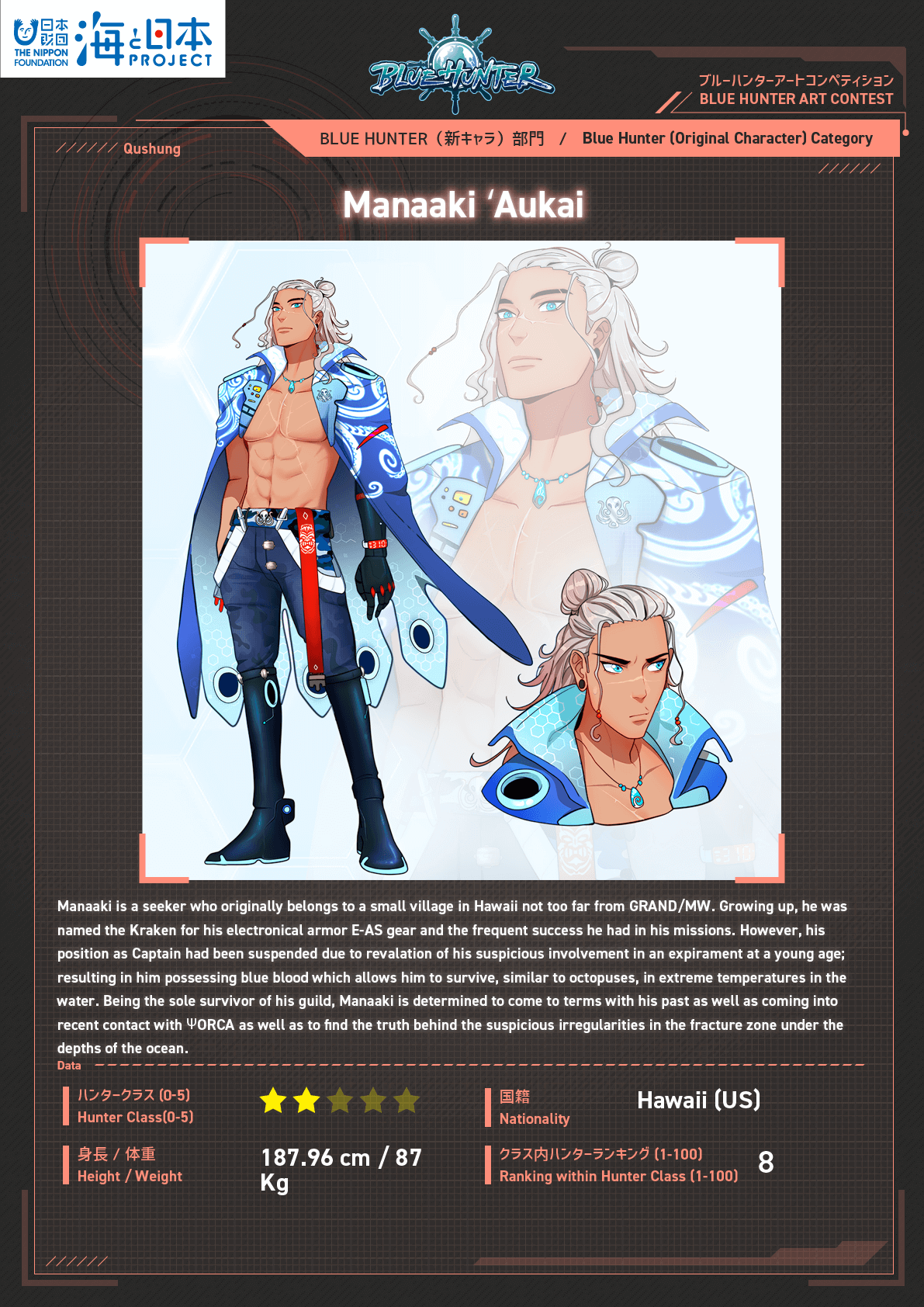 Manaaki is a seeker who originally belongs to a small village in Hawaii not too far from GRAND/MW. Growing up, he was named the Kraken for his electronical armor E-AS gear and the frequent success he had in his missions. However, his position as Captain had been suspended due to revalation of his suspicious involvement in an expirament at a young age; resulting in him possessing blue blood which allows him to survive, similar to octopuses, in extreme temperatures in the water. Being the sole survivor of his guild, Manaaki is determined to come to terms with his past as well as coming into recent contact with ΨORCA as well as to find the truth behind the suspicious irregularities in the fracture zone under the depths of the ocean. 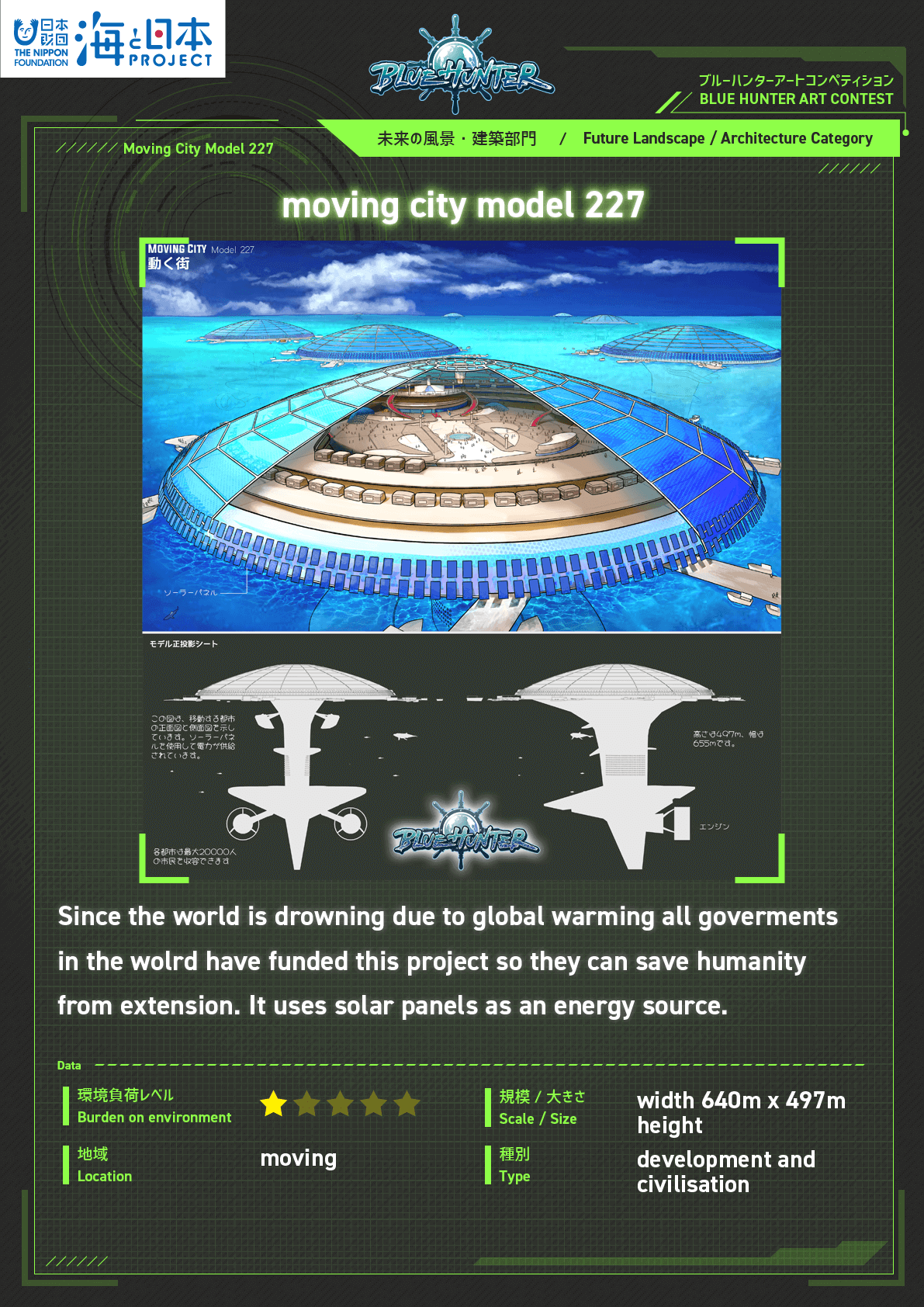 Since the world is drowning due to global warming all goverments in the wolrd have funded this project so they can save humanity from extension. It uses solar panels as an energy source. 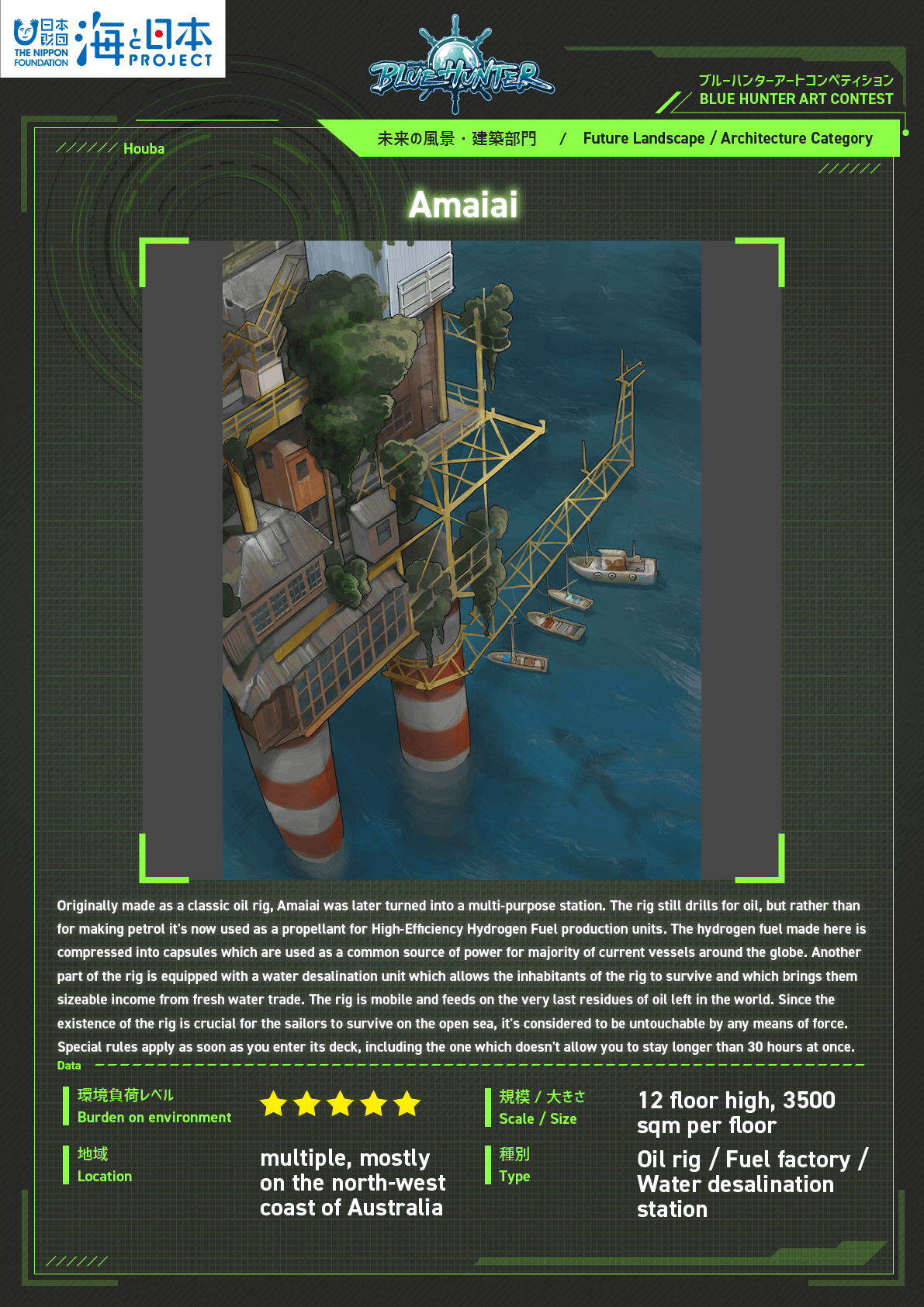 Originally made as a classic oil rig, Amaiai was later turned into a multi-purpose station. The rig still drills for oil, but rather than for making petrol it's now used as a propellant for High-Efficiency Hydrogen Fuel production units. The hydrogen fuel made here is compressed into capsules which are used as a common source of power for majority of current vessels around the globe. Another part of the rig is equipped with a water desalination unit which allows the inhabitants of the rig to survive and which brings them sizeable income from fresh water trade. The rig is mobile and feeds on the very last residues of oil left in the world. Since the existence of the rig is crucial for the sailors to survive on the open sea, it's considered to be untouchable by any means of force. Special rules apply as soon as you enter its deck, including the one which doesn't allow you to stay longer than 30 hours at once. 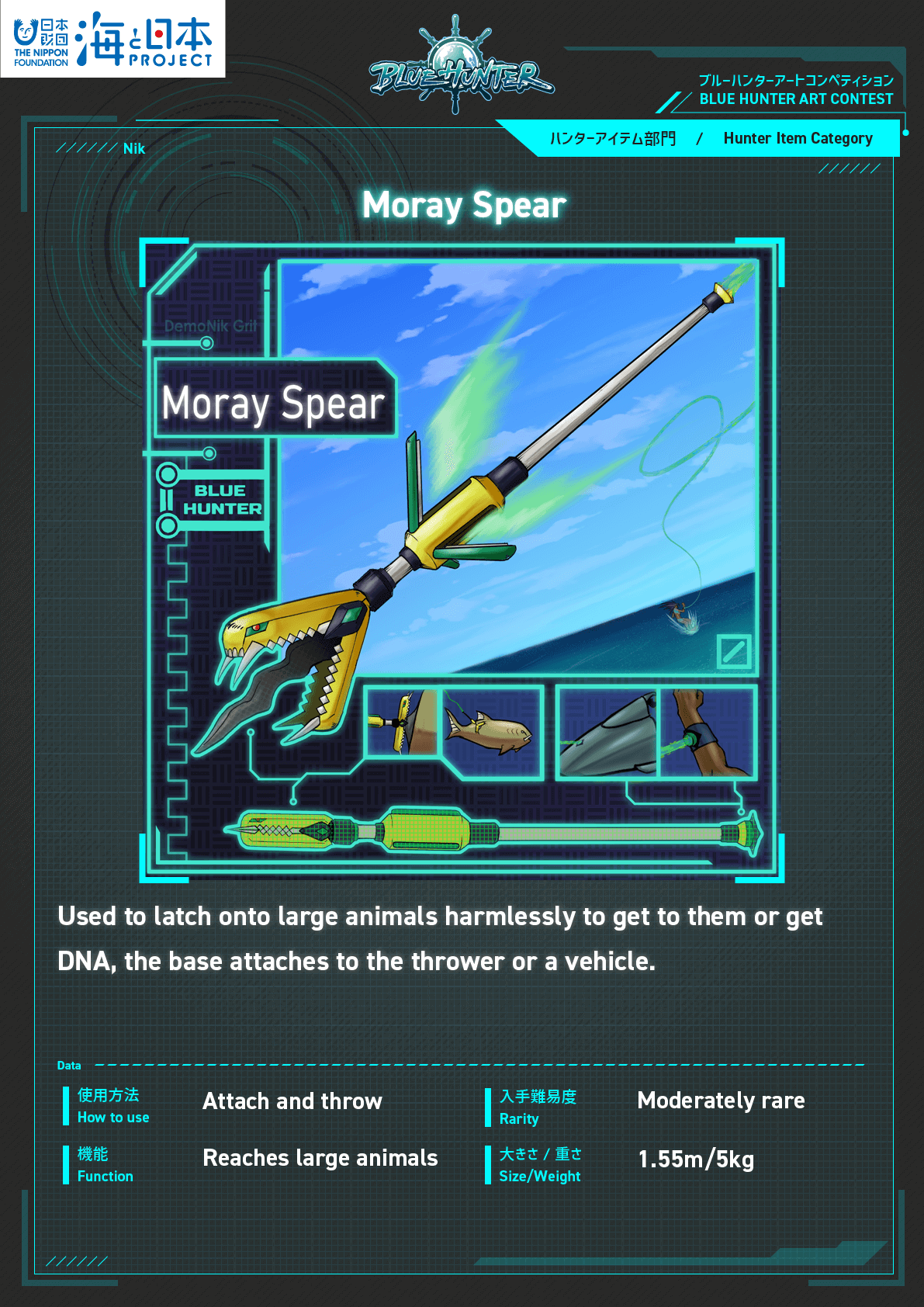 Used to latch onto large animals harmlessly to get to them or get DNA, the base attaches to the thrower or a vehicle. 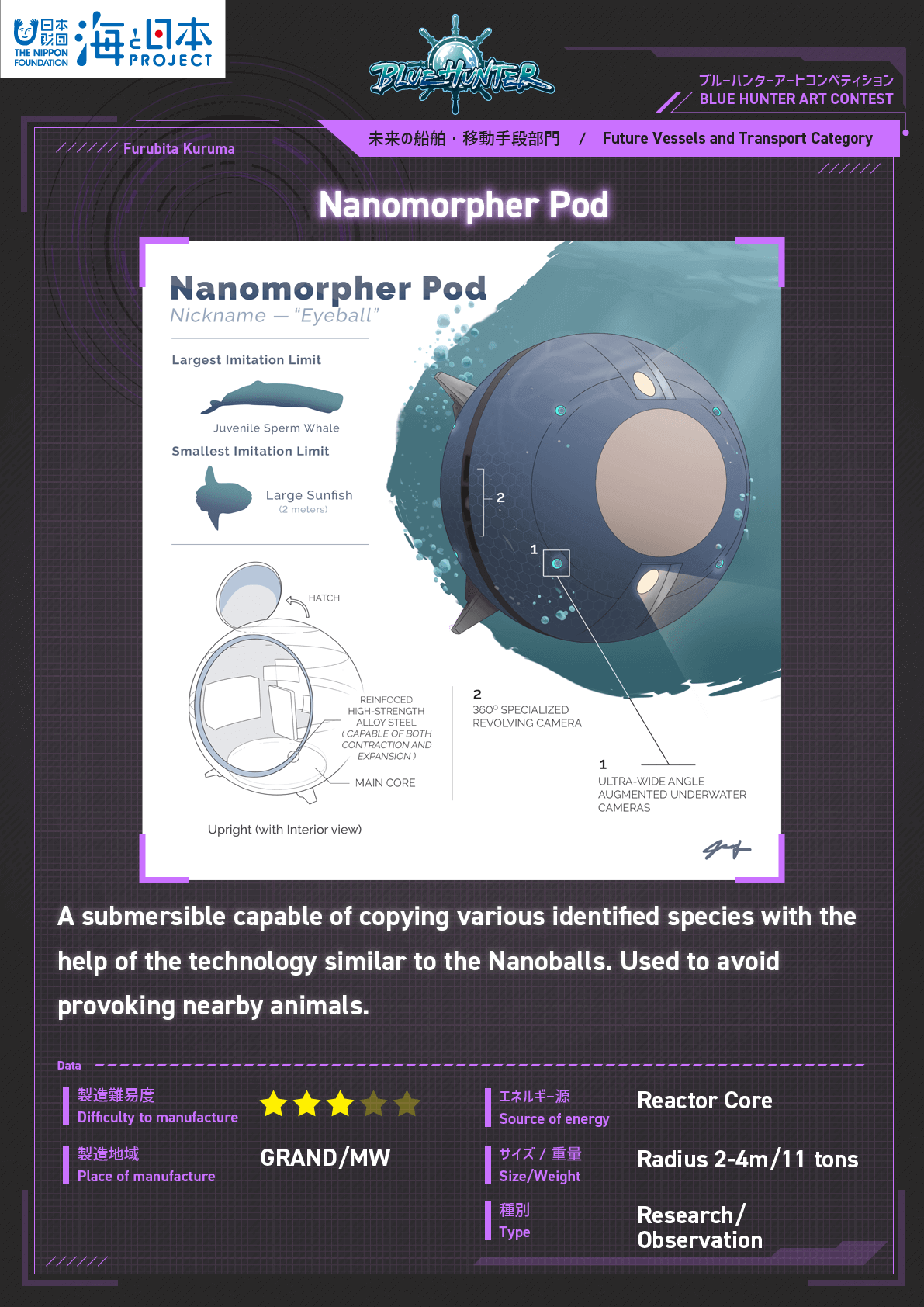 A submersible capable of copying various identified species with the help of the technology similar to the Nanoballs. Used to avoid provoking nearby animals. 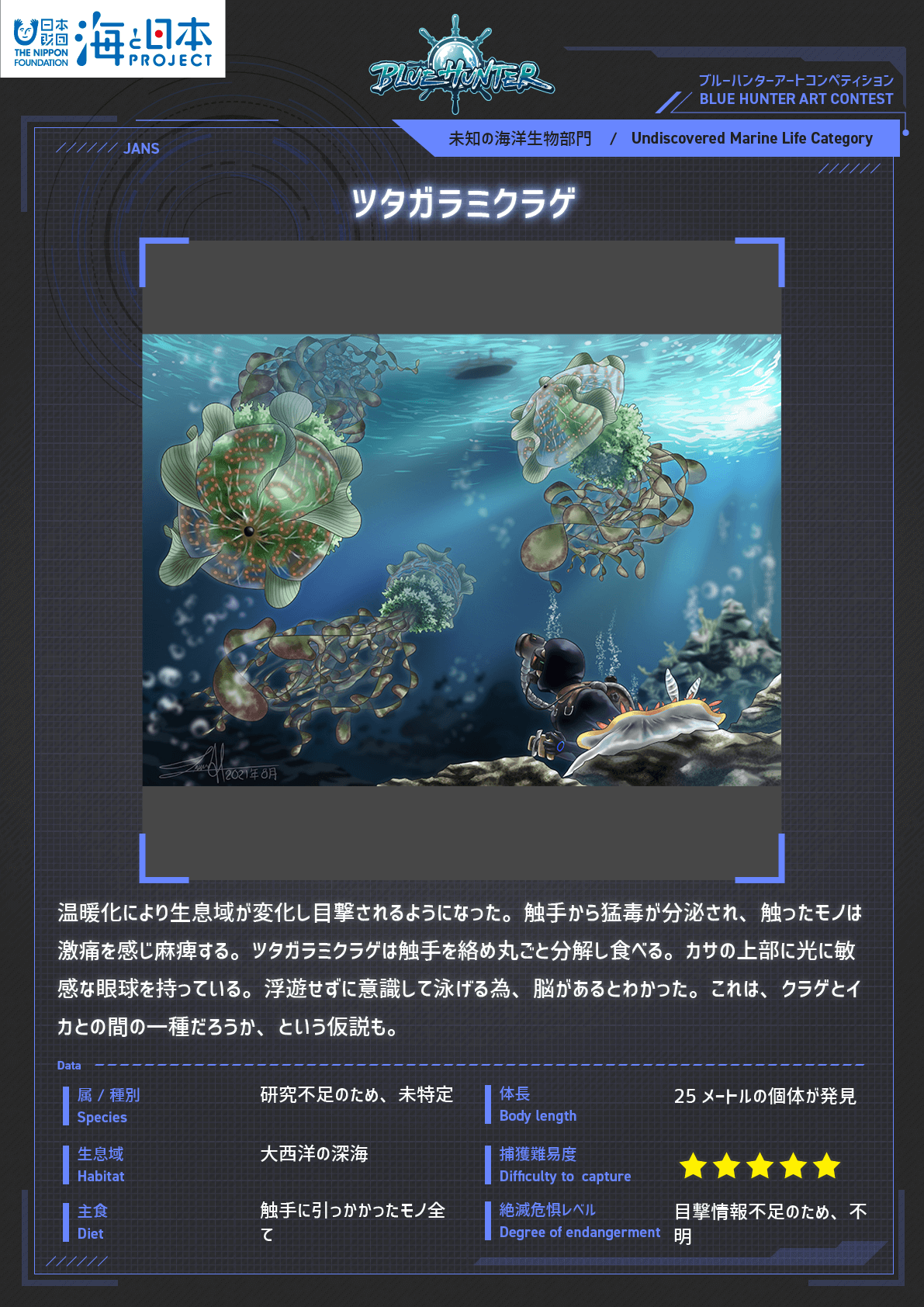 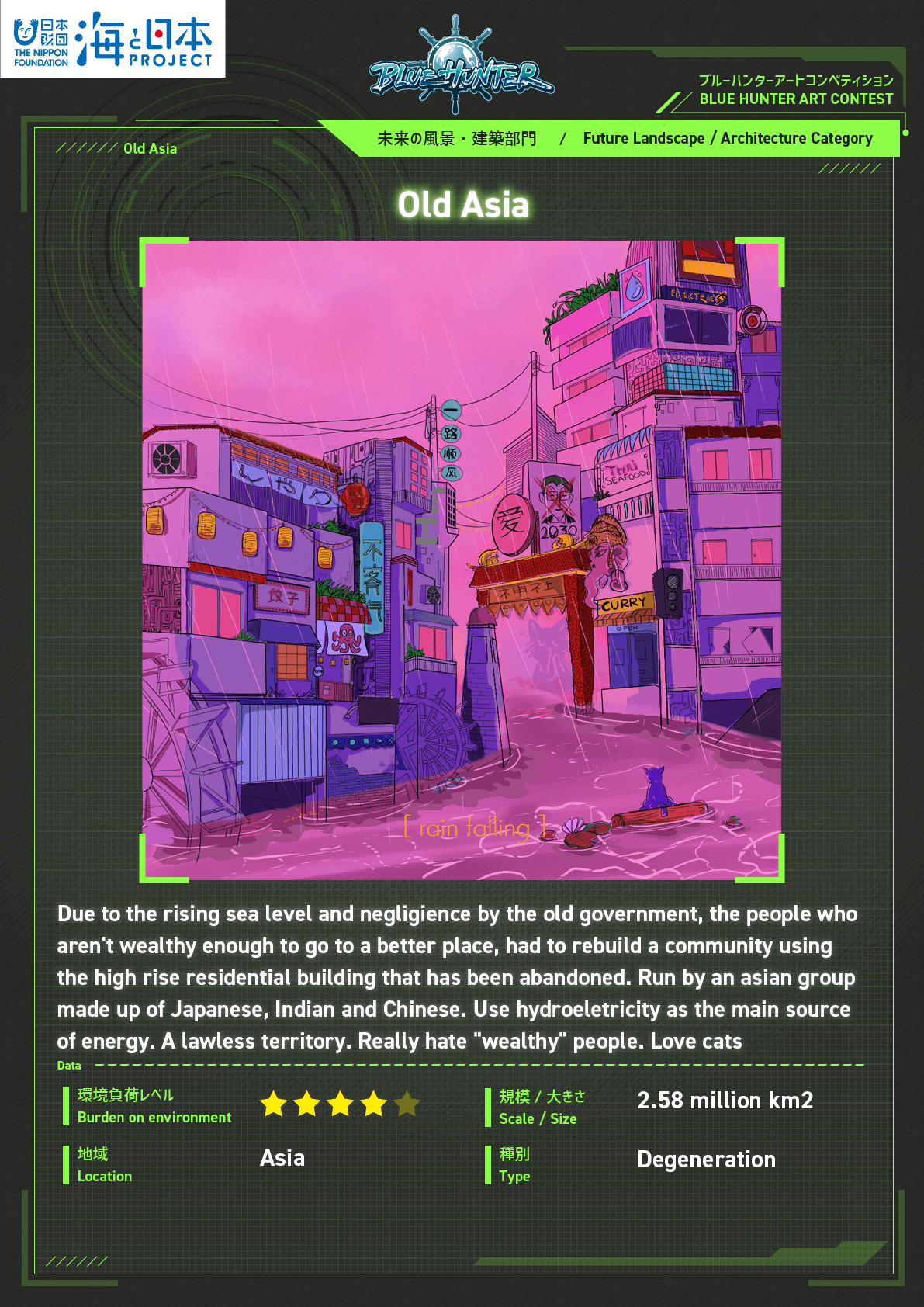 Due to the rising sea level and negligience by the old government, the people who aren't wealthy enough to go to a better place, had to rebuild a community using the high rise residential building that has been abandoned. Run by an asian group made up of Japanese, Indian and Chinese. Use hydroeletricity as the main source of energy. A lawless territory. Really hate "wealthy" people. Love cats 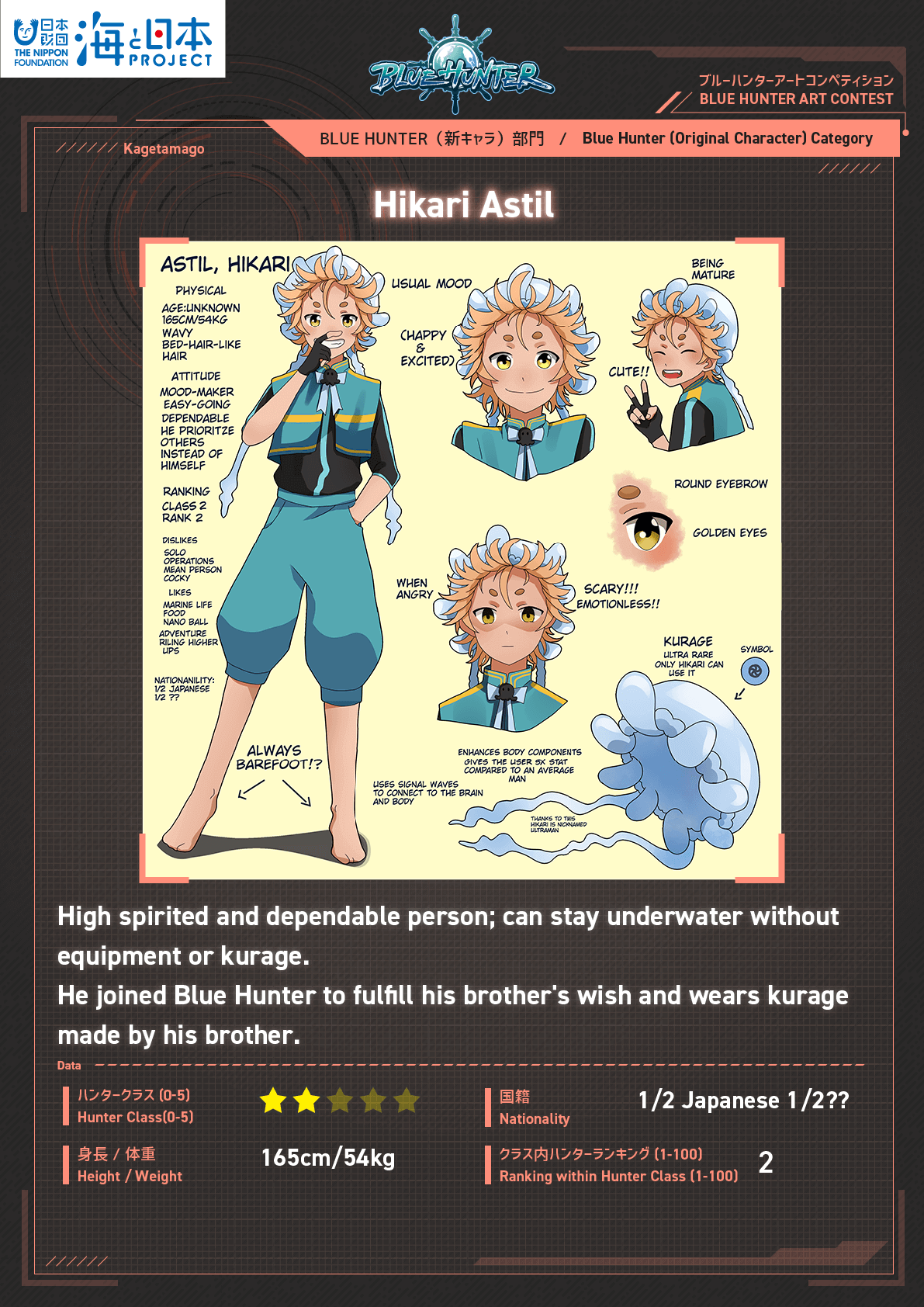 High spirited and dependable person; can stay underwater without equipment or kurage. He joined Blue Hunter to fulfill his brother's wish and wears kurage made by his brother. 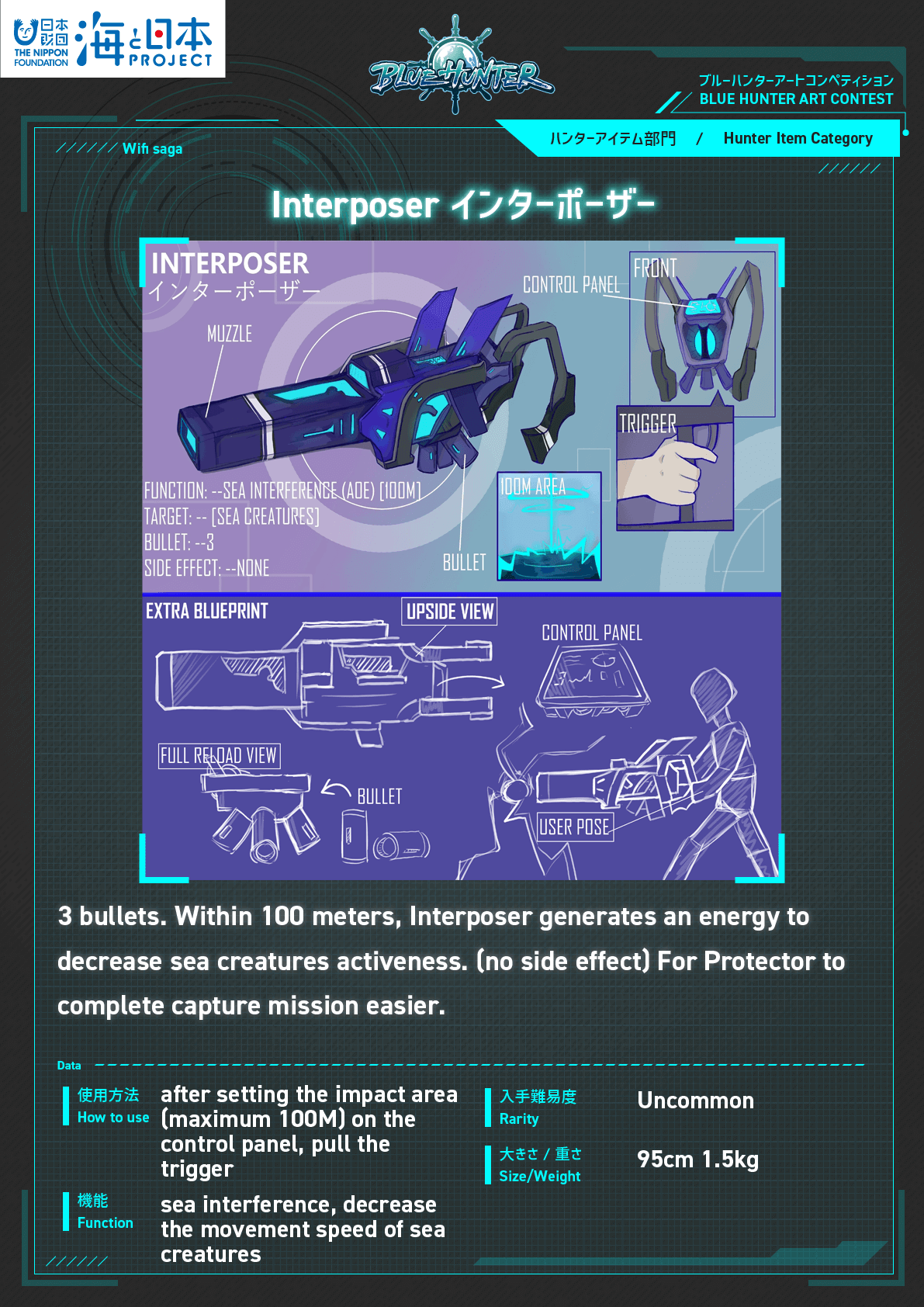 3 bullets. Within 100 meters, Interposer generates an energy to decrease sea creatures activeness. (no side effect) For Protector to complete capture mission easier. 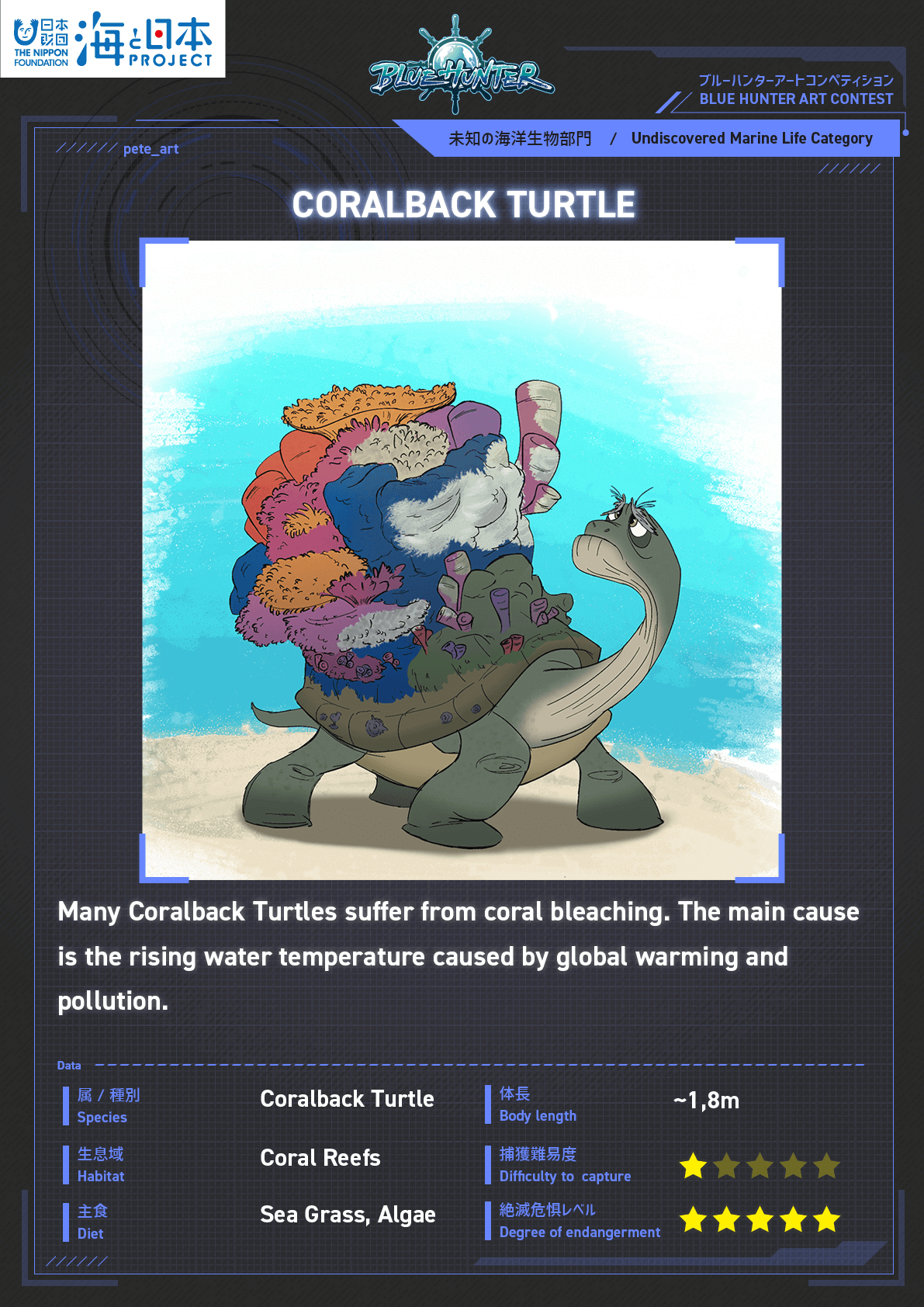 Many Coralback Turtles suffer from coral bleaching. The main cause is the rising water temperature caused by global warming and pollution. 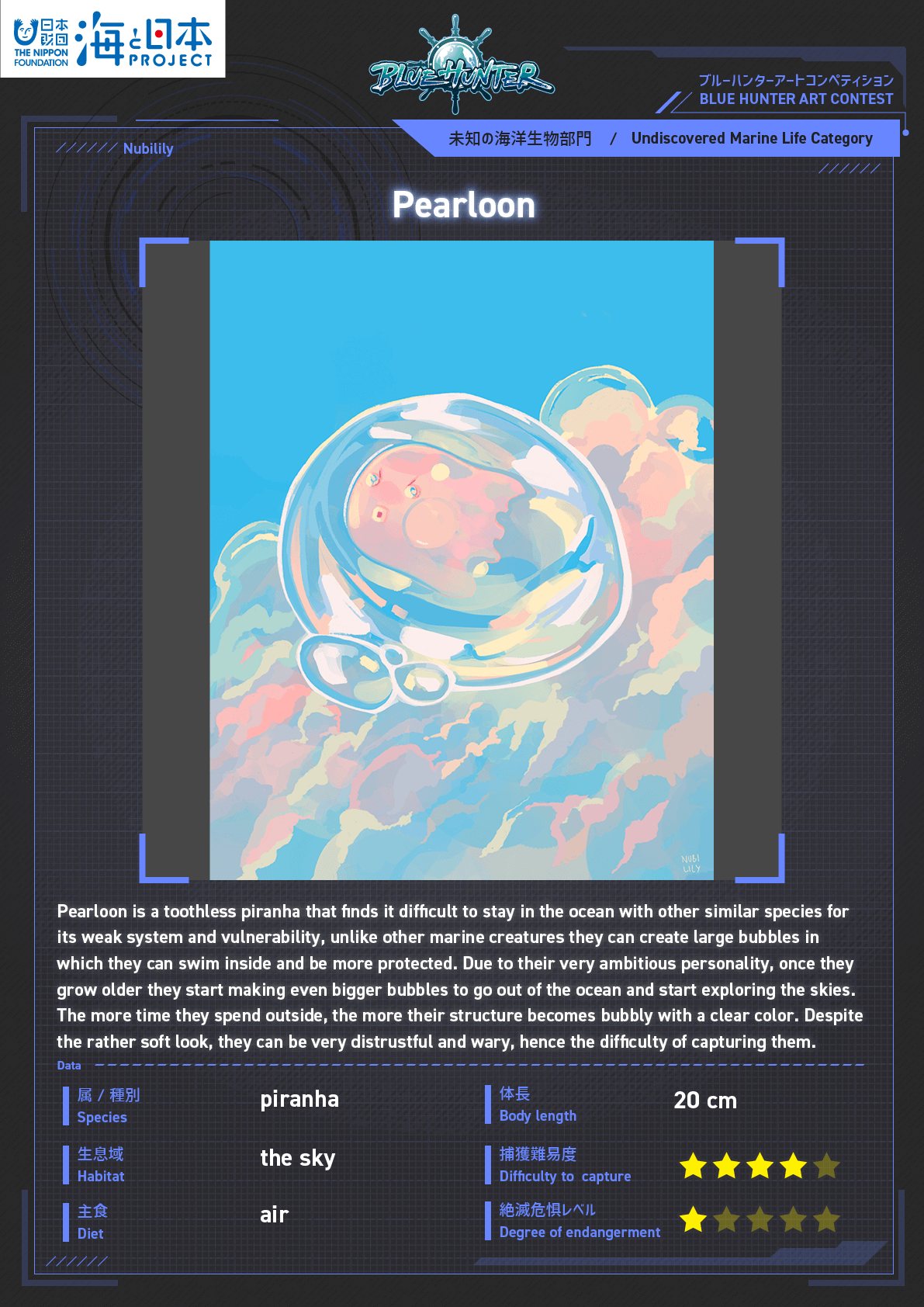 Pearloon is a toothless piranha that finds it difficult to stay in the ocean with other similar species for its weak system and vulnerability, unlike other marine creatures they can create large bubbles in which they can swim inside and be more protected. Due to their very ambitious personality, once they grow older they start making even bigger bubbles to go out of the ocean and start exploring the skies. The more time they spend outside, the more their structure becomes bubbly with a clear color. Despite the rather soft look, they can be very distrustful and wary, hence the difficulty of capturing them.