A self-sufficient ship used by Blue Hunters. As well as making full use of solar batteries, wind power and tidal force, it also creates and stores hydrogen by breaking down surrounding seawater. Not only is it self-sufficient, but it also supplies energy to the underwater power grid (Sea Force). Completing missions using ZEROships such as the ψOrca usually leads to more Gains and are seen very positively. Completing a mission at a Loss (i.e. plus emissions) is acceptable in the event of necessary withdrawal from a dangerous or life-threatening situation. 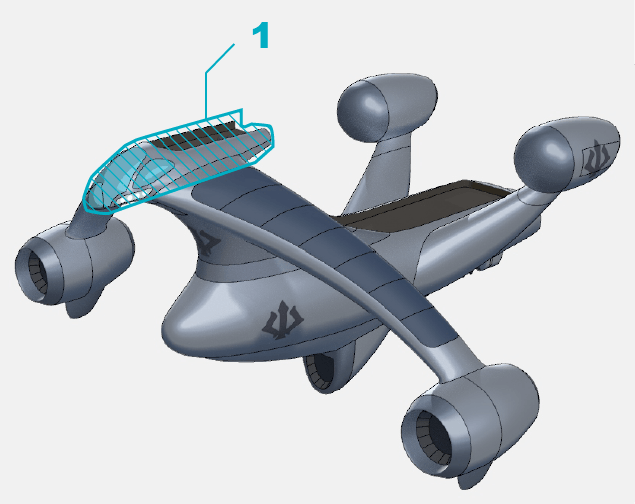 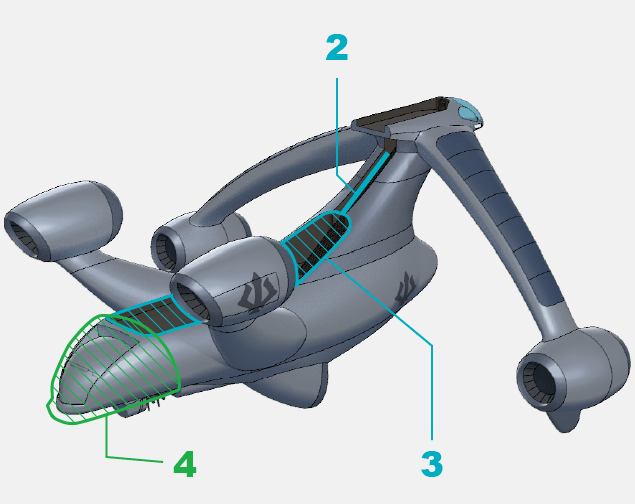 A small bridge which also serves as storage for cargo needed for maintenance of the Ryujin and Kouten. It has a see-through canopy that can open up fully. Generally used as an observation deck or banquet hall.

Connects to the 1st Bridge Headbridge

There is a hatch entry, so you can enter/exit the craft while it is in semi-sub mode. Kakeru once hit his head on this door.

A flat deck designed for the loading of mission packages. There are many different types of packages from ones for capturing live specimens, for exterminating specimens, for combat and more.

This part is underwater when the ψOrca is in semi-sub mode, and there is a package which turns the deck into something of a sight-seeing bus with windows. The maximum package height is up to the 1st Bridge.

The cargo stores all equipment as well as Raijin (probe) and Kouten (drone car suitable for both land and sea). Either of these can be taken to the 2nd Deck as a passion package.

This is the mode used when replacing or maintaining mission packages, charging solar cells or navigating shallow waters such as harbors. The waterline can be adjusted using extremely small ballast tanks.

This mode is used for submerged mission packages. There is no need for a crane when lowering ROVs. The 1st Deck and Bridge are located above sea level, so from above water it just seems like quite a large pleasure craft. The two 'forelegs' are used to move forwards and backwards, and can be used alternately to steer. Pods near the bottom of the hull contain propellers used to propel the ship.

The ship runs at full throttle with 4 water jets. Pseudo-hydrofoils are formed using electromotive force in the upper arms. If the ship surpasses 50km/h, the hull begins to rise (the rear part lifts using rigid hydrofoils). When the two jets at the back are running, the pod at the bottom of the hull will intake water.